In the final analysis, your attitude determines your effectiveness in everything, every time! LGL www.LuisLobo.Biz
Posted by Luis Lobo at 1:57 PM No comments:

"IT is TIME to open the doors". By my friend and mentor Frank Keating, ABA CEO.


Like many Republicans — what's more, like many Americans — I regard Ronald Reagan as my political hero and inspiration. For conservatives who came of age in the 1960s and '70s, President Reagan offered a principled and compassionate argument for individual freedom and an equally compelling case for personal responsibility.
In 1989, Reagan described his view of America "as a tall, proud city built on rocks stronger than oceans, wind-swept, God-blessed and teeming with people of all kinds living in harmony and peace; a city with free ports that hummed with commerce and creativity. And if there had to be city walls, the walls had doors and the doors were open to anyone with the will and the heart to get here."
Unfortunately, too many conservatives — though they aspire to walk in Reagan's footsteps — have forgotten thatimmigration reform is the most Republican of causes. We cannot support open borders for trade but not for people. We cannot support the unfettered exchange of goods and ideas while building razor-wired walls that separate children from their parents. We cannot make America stronger and more prosperous by excluding tomorrow's talent and industry.
From my perspective as a Reagan Republican — indeed, as a senior official in the Reagan administration during the last major immigration reform process — I am convinced that we stand on the precipice of opportunity.
In numbers that we haven't seen since the early 20th century, immigrants have been coming here to work and to build a better future for their families. Just as immigrants helped fuel the engine of America's emerging industrial economy 100 years ago, today they are filling two critical job gaps: high-skilled professions in science, technology and advanced manufacturing, and low-skill service and industrial jobs in fast-growing regions. We need immigrants of all skill levels to help build the 21st century economy.
Offering opportunities to new Americans doesn't take jobs from citizens. The economy is not zero-sum. It's dynamic, and bringing new talent to American jobs will enlarge the economy for everyone. In June, a Congressional Budget Office report estimated that the Senate's bipartisan immigration reform bill would boost economic growth by 5.4% after 20 years and reduce the deficit by $900 billion over that period.
Immigration would also help address a critical long-term gap in funding for America's two signature entitlement programs: Social Security and Medicare. In 1950, there were about 16 workers for every retiree. Today, there are only about three. But according to Social Security's chief actuary, immigrants, who tend to come to the United States at the start of their careers, would enrich the Social Security trust fund by $500 billion over the next 25 years, and by an impressive $4 trillion by the end of the century. That's a game-changer.
These numbers underscore an important point. Immigrants are coming here to work, not to become dependent on the state. People don't make perilous journeys and risk their life savings and sometimes their lives for the goal of getting a welfare check, a food-stamp card or a housing voucher. And welfare reform has made America even less attractive for those who would go on the dole.
But the considerable economic benefits aren't the main reason we should reform immigration. America was the world's first nation to be based on principles, not ethnicity. Citizenship is at once narrow and broad — available to those who share our principles, regardless of race or national origin. It is unconscionable to leave a class of neighbors who share our values in perpetual second-class status.
The promise of citizenship has always drawn pioneers who have made America the strong country it is today. Immigration reform fulfills the promise of the American dream for new generations who will make our country even stronger.
The Senate bill also protects the rule of law by securing the border and ensuring that only law-abiding immigrants receive legal status. Border security is the indispensable lintel that shoulders the load. Without it, the entire structure would be in jeopardy. President Obama can help calm concerns by pledging not to use delays or waivers to weaken the bill.
Future Americans with will, resolve and heart are waiting. As Ronald Reagan might have put it, it's time to open the doors.
Frank Keating, a former Republican governor of Oklahoma, is president and chief executive of the American Bankers Assn. 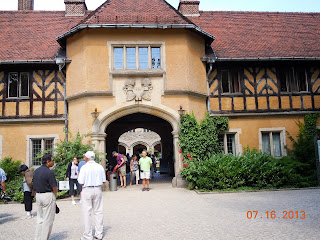 n the final analysis, your attitude determines your effectiveness in everything, every time! LGL www.LuisLobo.Biz
Posted by Luis Lobo at 1:58 PM No comments: